Kia refreshed its best-selling model on the U.S. market, the Sorento, in 2018, four years after introducing the third generation.

The Korean carmaker noticed the Americans’ appetite for SUVs and burned the midnight oil to make an excellent one: the Sorento. Please make no mistake; it wasn’t the best in its class nor the most beautiful or more powerful. It wasn’t best on anything, actually, but it had that mix of “little bit of everything” that transformed it into the best-selling Kia on the North American market.

On the outside, the designers worked hard to create a car that looked the same, but it was different in its details. The front bumper got a crispier look, and, depending on the trim level, it received LED fog lamps. A chromed trim adorned the side scoops, and most importantly, the headlights received LEDs for the upper trim levels (SX and SXL).

Inside, the carmaker kept what the customers liked at most and changed what they wanted the least. As a result, there was a new gear-knob. The design team removed the sliding cover for the cup-holders on the center console. It looked like Sorento’s customers moved that away when they bought the car and never pulled it back. Like its predecessor, the 2018 Sorento featured heated and ventilated front seats and heated middle ones. No one cared too much for the last row since they were seldom used and only for short distances.

Under the hood, the Sorento received important updates. Kia dropped the 2.0-liter turbocharged unit. That left the seven-seat SUV with only two engine options. On the plus side, Kia got rid of the six-speed automatic gearbox and introduced a newly developed eight-speed automatic transmission. 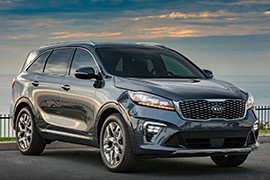