After 28 years since the Sportage’s first generation, Kia unveiled the fifth sequel of its compact SUV, with a version designed exclusively for the European market.
The Sportage evolved a lot in its almost three decades from a small off-road vehicle fitted with a transfer case and low-range gear to a practical SUV that could cope better with the urban traffic than with tracks and roots.

Thanks to the LED lighting revolution, the headlights didn’t have to be round or squared anymore. Kia chose to make them in a boomerang style, like two arrows pointing towards the car’s center. They were integrated into the broad black grille at the front and joined by a pair of LED daytime running lights on each side. At the bottom, an additional black, unpainted area under the bumper formed a scratch-resistant shield. The car’s edgy styling continued on the sides with the sculptured door panels. Its high window area was curved upwards towards the C-pillar, while at the back, the car sported a raked-forward windscreen for the tailgate and two wide, angular-shaped, LED taillights. A silver shield protected the underbody from scratches on the lower side, flanked by two wide fake exhausts.

Inside, the carmaker installed a wide display for the instrument panel and the infotainment unit. Kia left a few physical buttons for the audio system and the hazard lights on the center stack. Instead of a regular gear stick, the carmaker provided a shift-by-wire transmission dial for the automatic transmission. The customers could choose between sage green and black upholstery and bold quilting and black metal wood trims. 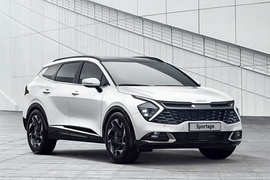