The Russian carmaker tried to refresh its lineup and introduced the Kalina model in 2006 as a replacement for the already old Lada 110.
After the fall of the communist regime in the U.S.S.R., things didn’t go so well for the Togliatti factory. But slowly and surely, it started to get up on its feet and launched the 110 in 1996 and the Kalina in 2006. It was a small-segment vehicle aimed against the Dacia/Renault Logan and Hyundai Accent.

The exterior looked like there were a few design teams, and they didn’t talk one to another. The result was a rounded shape with headlights that looked from a different vehicle while the trunk was added after the rest of the car was ready. And that’s not too far from the truth since the Kalina sedan was unveiled after the Kalina hatchback. The small window behind the rear doors resembled the one fitted on the Opel Vectra B, and the taillights looked close to those from the Opel/Vauxhall Astra sedan.

Inside, the designers installed the headlights controls on the steering wheel’s left, inspired by some German cars. Unlike those, the Kalina dashboard featured seven air-vents, apart from the windshield defroster. The Russian engineers definitely knew how the winters are looking over there.

Under the hood, Lada installed one engine option, carried over from the Lada 110 lineup. It was a four-pot 1.6-liter engine that offered 80 hp. It was paired to a standard 5-speed gearbox. The Russian engineers went for the “keep-it-simple, Ivan” method. 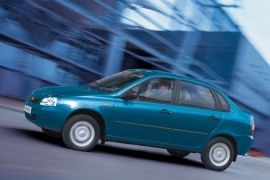