After years of building cars based on the ancient Fiat 124 platform, the Russian carmaker invested in a revolutionary vehicle for its market: the Samara.
In 1984, the Russian carmaker AvtoVaz introduced the Samara to the market. It was a huge success for the communist company to switch from a longitudinally-mounted engine and rear-wheel-drive system to a more modern transverse front engine and front-wheel-drive system. To do that, the engineers took their inspiration from other European carmakers, where the Lada was sold. Lada was the commercial name for the AvtoVaz (which was an acronym for Volga Automobile Factory).

There was no design language. It was a boxy-looking vehicle available at the beginning as a 3-door hatchback, which later on evolved into a 5-door hatchback and a sedan. Its square-looking headlights and almost closed front grille evoked a simple design system with straight lines and flat panels. The only artistic touch was the beltline, which was curved upwards behind the B-pillar.

Inside, there was a cubist design language with straight lines and a boxy instrument panel. The very optimistic speedometer showed a speed of up to 180 kph (112 mph), while the car was able to go as fast as 156 kph (97 mph). The cranked windows were the only way to open them, and there was just a simple ventilation system, without air-conditioning. On the Western Europe market, the dealers installed aftermarket an audio system with a stereo-cassette. The five-door version featured wide-opening rear doors to allow easy access inside the vehicle.

Under the hood, the Soviet engineers installed a 1.1-liter gasoline engine fed by a carburetor and paired it to a 4-speed manual gearbox. Over time, there were new engine options that increased power output. The late models were fitted with a 5-speed manual. 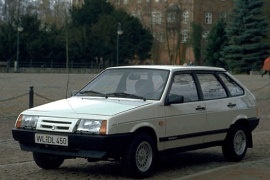