After the successful launch of the Aventador in 2011, Lamborghini worked another year to develop and launch the roadster version, which was just a little bit heavier, but as fast as the coupe.
On normal convertible vehicles, when the constructor takes the roof off, it has to add more weight to the chassis to improve the car’s rigidity. For the Aventador roadster, the Lamborghini had to add 50 kg (110 lbs), which means nothing for the 700 hp engine. To prove that, the Lamborghini engineers took the car to the Nardo race-track in Southern Italy and showed a top speed of 220 mph (354 kph) with the top down.

The look of the Aventador roadster is the same in the front and rear. Only the middle changed a bit by removing the roof. It is a two-piece, carbon-fiber roof that can be taken out and stored in the front trunk. The engine was placed in the rear-mid position and it was covered with four oddly-shaped glass panels to improve the cooling and to allow the view to the 12 cylinder masterpiece.

Inside, the stealth-fighter jet inspiration design was obvious, from the bucket seats to the cockpit layout. It is hard to call that arrangement as a dashboard, with its extended and risen center console. Some buttons and switches are directly taken from Audi, which might look awkward for a supercar like the Aventador.

The seven-speed automatic single-clutch gearbox was quick and lighter than a double-clutch one. The traction mode could be adjusted via two buttons on the center console from the street use, to track mode. That could send the torque from a split 30:60 to a 10:90 percentage. 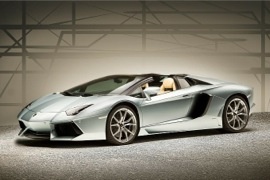