The Aventador S Roadster stepped into it’s brother shoes, but with a retractable cap on its head.
It also wear slightly different clothes too.

After it was taken over by the Volkswagen Group, the Lamborghini car-maker started to increase its model range and to diversify each and every model it had on its stable. After six years since it was launched the Aventador received an important upgrade with the S version.

The roadster maintains the unmistakable design of the Aventador S (coupe) along with unique features reflecting its roadster personality: a combination of distinctive Lamborghini design DNA and the result of extensive aerodynamic testing. In the back, the roadster distinctively featured different lines then the coupe, offering its aerodynamic character. An engine bridge runs from the rear window to the back, in a mix of body color and black painted carbon fiber engine hood blades: a transparent option was also available to show off the V12 engine within.

The interior was not very much changed. It still looked like a cockpit from a fighter-jet, with toggle switches and a flap above the engine start button. The bucket-seats were covered in leather and bolstered for side support. The infotainment unit was little upgraded from the original, 2011, Aventador.

The most important was the 6.5-liter V12 engine placed in front of the rear axle. It was mated to a standard Lamborghini lightweight Independent Shifting Rod (ISR) 7-speed shifting system. The all-wheel-drive and all-wheel-steering super-car was able to hit the 60 mph (96 kph) in under three seconds. 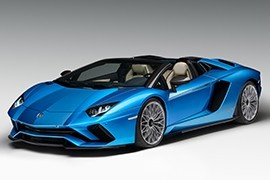