Eight months after the launch of the Huracan LP 580-2, Lamborghini unveiled an open-top version for it at the 2016 Los Angeles Auto Show.
With almost 600 horses unleashed from its V-10 engine, the Huracan LP 580-2 Spyder maybe wasn’t easy to drive. But it certainly was a playful car with loads of character. The Italian carmaker knew that its customers liked the open-top version of the Huracan and delivered it with a rear-wheel drive. Thus, it wasn’t just a pleasant vehicle to drive fast on a track but also pleasant to drive slowly on regular streets. Moreover, the carmaker made some aesthetic changes compared to the closed-body version.

The wedged-shape Huracan LP 580-2 Spyder featured a slightly different front fascia than its coupe sibling. At the front, its middle-section was black instead of body-colored as its coupe sibling. From its side, the Spyder featured different side panels with an up-kick behind the doors to conceal the safety arches mounted behind the seats. Its power-operated roof opened and retracted in 17 seconds at speeds up to 50 kph (31 mph). At the back, the engine lid sported eight cooling vents.

Inside, the LP 580-2 Spyder featured a pair of sport bucket seats with high bolstering on their sides, and, in front of the driver, Lamborghini installed a 12,3” TFT instrument panel. The carmaker included the buttons for the transmission, the parking brake, and the engine starter on the massive center console. Since the car was exclusively available with a seven-speed automatic (dual-clutch) gearbox, the carmaker added a pair of aluminum paddle-shifters behind the steering wheel.

Since the car was rear-wheel-drive, its front axle was lighter, leading to a 40/60 weight distribution. Thus, it enhanced the pure rear-wheel-drive feeling. A magnetorheological suspension was on the options list. 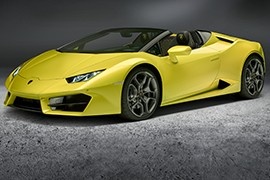