The Miura Roadster was a concept-car built by Bertone and showcased by Lamborghini at the 1968 Brussels Motor Show.
Considered the first supercar with a central-mounted engine, the Miura was designed by the Lamborghini engineers against the principles of the company’s founder, Ferruccio Lamborghini. Ferruccio was rather a fan of Gran Turismo. The first prototype, the P400, was revealed by the end of 1965, while the first Miura was unveiled in March 1966, and it was showcased at the Geneva Motor Show without an engine inside because it didn’t fit. It was a miscalculation, but in the end, all went well, and the carmaker managed to install the transverse engine inside.

Bertone considered that the Miura should be offered as a roadster as well and built a prototype, which Lamborghini showcased. While it was more of a targa than a proper roadster, it gathered media and customer attention. But Ferruccio didn’t want to build the open-top version.

The interior was simple, specific to the 60s, with a low seating position and a 3-spoke steering wheel. Its center console was tall and wide, even though there wasn’t used as a transmission tunnel. Like most of the concept cars, the Miura Roadster featured a leather-wrapped interior with high-bolster seats. The same expensive materials were used for the door panels, while the floor was carpeted with a thick cloth.

Bertone installed the same dashboard for the instrument panel as the one from the coupe version, but with special attention to the details.

Bertone installed the most powerful Lamborghini engine available at that time, the 4.0-liter V12. This time, it took its time to make the calculations and fit it better. It was paired to a five-speed manual gearbox. 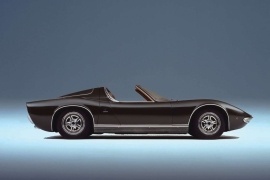