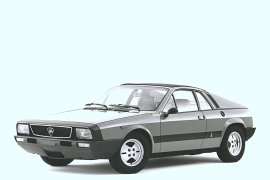 The Lancia Beta Montecarlo was supposed to be a replacement for the aging Fiat 124 Coupe.
However, Fiat decided to go with the cheaper alternative designed by Bertone, thus the Pininfarina-designed Montecarlo joined the Lancia’s Beta family.

Despite its Lancia badge, the Montecarlo was more Pininfarina, being the first car developed entirely by the Italian coachbuilder.

In 1974, the Lancia Beta Montecarlo was unveiled at the 45th at the Geneva International Motor show. We could easily be fooled by its name, but the Beta Montecarlo had little in common with the Beta family.

The Lancia Beta Montecarlo had a mid-engine configuration and a rear-wheel-drive, in contrast to the front wheels driven Betas with a front-engine layout.

Paolo Martin from Pininfarina gave the Montecarlo a clean and modern shape, with a squared-off tail and nose, as well as a distinctive pair of wings at the sides of the back window to the lip of the side-hinged engine lid. The front fascia featured rectangular headlamps and the nose of the car was wrapped in black plastic.

Initially, the Montecarlo was to be equipped with a 3.0-liter V6 powerplant, however, it ended up with a smaller 2.0-liter unit due to the oil crisis of the mid-1970s. With the small unit, the car’s performance wasn’t scintillating, offering just 118 hp. Paired with a 5-speed manual transmission, the Montecarlo took around 9 seconds to reach 100 kph.

Thanks to the mid-engined layout, even if the car didn’t offer supercar-like performance, the Montecarlo had a balanced chassis and managed to provide superb handling.