Lancia had already made tradition with naming its models after the Greek alphabet letters.
Thus, the Lancia Gamma was designed to replace the Lancia Beta.

Also known as the Lancia 20 HP or the Lancia Tipo 55, the passenger vehicle was produced by the Italian carmaker between 1910 and 1911.

The new Gamma was differentiated from the Lancia Beta by an increase in displacement, the engine capacity getting up to 3460 cc. The engine was a side valve inline-four, with a cast-iron monobloc.

The powerplant produced 40 hp at 1500 rpm and was mated with a 4-speed gearbox that sent the power to the real wheels. With the Lancia Gamma , the driver could reach a decent top speed of 110km/h (68 mph).

For the customers looking to participate in competitions, the Gamma was also available with a bigger engine, a 4.7-liter unit that developed more than 50 hp.

Buyers also had possibility of choosing between frames of different configurations: the wheelbase measurements could vary (like the degrees of inclination of the steering column and the final transmission ratio) depending on the types of bodywork to be mounted.

The separate body of the car was built on a ladder frame, while braking was by drums.

With only one year in production, only 258 units were produced before the Gamma was later replaced by the Lancia Delta in 1911. 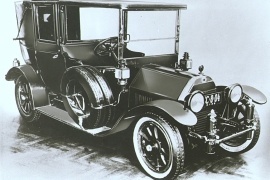