Apart from its length, number of doors and interior space, the Defender 90 is quasi-identical with its bigger brother, the Defender 110.
In other words, it’s simply a short-wheelbase Defender, no longer body-on-frame like its predecessors but built on a brand new architecture shared with other modern Land Rovers. Re-engineered from the ground up, there’s not much in common between the old Defender 90 and the new one, but that should be held against it.

Part of the Defender trademarks, there is still an upright windshield, a side-hinged rear-door and a spare wheel that’s been mounted externally, but other than the name, that’s where the similarities end. Thanks to the lightweight aluminum monocoque construction of the chassis the Defender is much stiffer, while the ground clearance is up to 291 mm high. Up to six passengers can have a seat inside, with the sixth seat either becoming a center console when not in use or a huge middle blind spot when in use. The short front and rear overhangs translate into an approach angle of 38 degrees, a breakover angle of 31 degrees and a departure angle of 40 degrees. 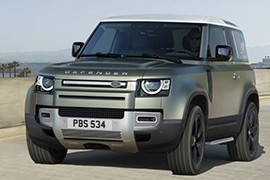