Land Rover introduced an extended wheelbase version for its flagship model Range Rover, which was already at its fourth generation.
The British carmaker had extensive experience in building off-road vehicles and combined that with luxury features when it created the 2012 Range Rover. It was the first generation that relied on an aluminum unit-body construction, which raised more difficulties when the carmaker tried to build a long-wheelbase version. Yet, the British engineers succeeded in overcoming all of those and made it.

From the front, it showed a different pattern for the mesh-grille, adorned by rectangular cuts inside each of the three horizontal slats that filled the area between the headlights. The Range Rover L featured a specific badge under the four-slats chromed Atlas vents from the front doors. Since most of the 200 mm (7.9”) extended wheelbase was added for the rear passengers, the rear doors were longer.

The fourth generation of the Range Rover didn’t provide too much legroom for the rear passengers, but this L version fixed that. It added 186 mm (7.3”) more legroom in the back. A 1.83 m (6 ft) occupant could completely stretch his or her legs. A two-seat layout was available as an option, with a wide console between the rear occupants.

Land Rover made that version without compromising the car’s offroad abilities, at least not that much. It still offered the same wading depth, but it added a new setting for the standard air suspension that lowered the vehicle 49 mm (1.9”) in access mode. The carmaker offered it with fewer engine versions than the standard wheelbase version. 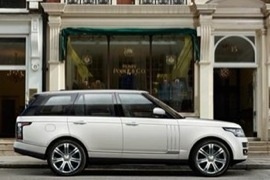