Due to new pollution regulations, most of the car-makers had to bring new vehicles on the market, in 2017.
Lexus had to improve its already old CT range.

Usually, a car is refreshed after four years from its launch and it stays on the market another three or four years after the facelift. For Lexus CT200h the first facelift was in 2013 and, in 2017, a second refresh was made for the premium hybrid compact-hatchback.

If you didn’t win a contest of “find 10 differences between two pictures”, probably you wouldn’t notice the differences between the 2013 and the 2017 CT200h models. The biggest difference was on the redesigned grille, which featured a 3D design pattern for the latter model and horizontal slats for the former. The Japenese car-maker didn’t even bother to change the light-alloy wheels. In the back, there were new LED taillights, with side-fins for aerodynamic purposes or for a better look.

Inside, the main difference was the wider, 10.3”, infotainment display offered as an option. It was still placed on top of the dashboard like it was planted after the car left the assembly line. There were no other notable differences inside the cabin. At least, the designers didn’t break the good things they did before.

For the drivetrain, the CT200h featured the same 1.8-liter Atkinson cycle gasoline engine with a 60kW electric motor. It was mated to the same CVT that made the car fuel-efficient. 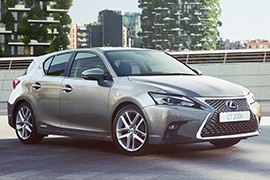