Lexus introduced the last update for the third generation of the IS range in 2020.
It was a mandatory revamp of its compact sedan, to keep its sales figure up in a harsh market hit by the world pandemic.

When Toyota decided to build a car to compete against the BMW 3-Series in 1998, the world looked amused at them. But from the second generation, the IS became a real competitor for the German brand.

The last update for the IS brought a new image for the car. The designers installed new headlights and the spindle grille, which was in line with the Lexus range’s aesthetic trend. The car was lower and wider than the non-facelifted version, due to its enlarged fenders. On its sides, the IS featured a new design for the sills that amplified the vehicle’s muscular profile.

Lexus prepared a new infotainment unit for the restyled interior that featured Apple CarPlay and Android Auto connectivity. The 8” touch-screen was fitted as standard, while a 10.3” unit was available as an option. Depending on the trim level, Lexus offered sport seats, leather upholstery, or simple, high-quality coth.

Lexus offered three engine choices, with either a turbocharged inline-four or two V6 units. The base model featured a rear-wheel-drive architecture while the V6 versions were offered with an all-wheel-drive system and a Torsen limited-slip rear differential. All versions were paired as standard to an 8-speed automatic. 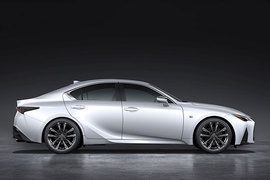