Mahindra introduced Scorpio in 2002, and it was a new chapter in the history of the Indian car-maker.
To drive on the backroads, dirt roads, and unpaved roads of India, the customers, required an off-road vehicle to move without problems and no issues. The Scorpio was the right answer, and it offered even more.

With its rugged appearance, boxy body-on-frame construction, and flat front fascia, the Scorpio was the car of choice for the army, police, politicians, and wealthy people from India. It wasn’t a cheap car for that market, but it was a trustworthy one. The chromed grille, big headlights, and flat surfaces made it easy to recognize either from the back or in the rearview mirror. The Mahindra Scorpio was sold in Europe with the Goa name since the Scorpio was already a trademark owned by Ford.

Inside, the Scorpio offered up to eight seats. It featured cruise control, automatic air-conditioning, man-made leather upholstery, an infotainment unit with a sat-nav system, and a touchscreen on the center stack.

Under the hood, the car-maker installed a base version with a 2.5-liter naturally aspirated diesel that offered 75 hp, the next in line was a 2.2-liter that provided 120 hp, and the top of the range 2.2-liter turbodiesel with 140 hp. Its main flaw was with the brake system that couldn’t stop the vehicle as quickly as other car-makers from the same time. 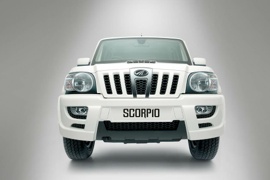