Carrying on his father’s pioneering work, young Karl Maybach came with his first engine dubbed the W1 in 1919.
Much like an artist’s sketch, the design was used as a study for the later developed W3 concept, unveiled at the Berlin Motor Show in 1921. However, his W1 “Testwagen” is far from being forsaken, having been one of the most daring designs at the time thanks to its in-line 6-cylinder architecture couple with a Daimler sourced chassis. The engine was quite a piece of engineering, having been rated at 46 hp. 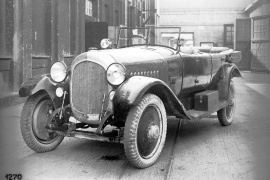