The DSG version entered production shortly after the release of the newly developed W6 platform.
Fitted withe the same in-line 6-cylinder petrol unit from the older W5 model, the new car was produced for 3 years until receiving an internal upgraded with the introduction of twin-overdrive transmission (DSG) which was essentially an improved version of the SG. Featuring a longer wheelbase than previous models, the W6 was a slightly differently styled vehicle with updated performance figures and very few units built, having reached a total of 90 for both regular and DSG types. 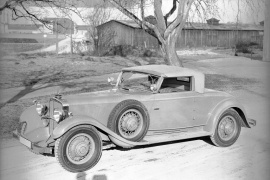