With only three units built, and only two units sold to private customers, the McLaren F1 GT was the epitome of the hypercar decades before even the term was invented.
The McLaren F1 was the fastest road-legal production vehicle for twelve years before the Bugatti Veyron stole its crown. Until then, the McLaren F1 proved highly competitive on roads and tracks worldwide, winning the famous 24 hours of Le Mans in 1995. But the carmaker couldn’t repeat that victory in 1996 or 1997, while in 1998, FIA abandoned the GT1 class. Yet, McLaren created the 1997 F1 GT to get the racing approval from the FIA. The regulations stated that a carmaker had to build and sell at least one vehicle able to be registered to give the car the green light to race.

At the front, McLaren extended the F1 GT nose to create more downforce. The carmaker added a roof-scoop to get more air into the engine. Unlike the race version, named GTR, the GT1 lacked the massive rear wing. Thanks to its longer back, which brought it the nickname “Longtail,” it didn’t need it.

McLaren kept almost the same interior as on the standard F1 version, with three seats and the driver placed in the middle. Its racing steering wheel was standard, while the carbon-fiber seats with high bolstering and padding kept their occupants safe in place during hard cornering.

McLaren installed a modified BMW V12 engine specially developed for the GT1 version. Its displacement increased to 6.1-liter from six liters, but the power remained the same. The carmaker did that change to make sure that the engine will last a 24 hours race. 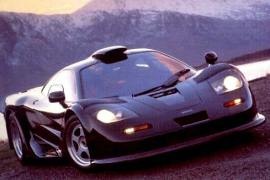