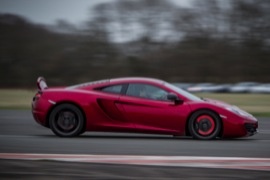 In 2011, McLaren launched its first car after the iconic McLaren F1 back in 1992.
It was named MP4-12C and it rocked the supercars world.

When a car manufacturer has more Formula 1 titles on its shelf than cars launched, it had to do something about it. It needs to get back something from that renowned name. By the time it launched the 12C, as it was known for short, it has eight Formula 1 constructor’s championships won and 13 driver’s championships. The MP4 resembles the first Formula 1 car built with a bodywork made out of carbon-fiber. And so was the MP4-12C.

The McLaren MP4-12C features a revolutionary carbon-fiber chassis structure, named Carbon MonoCell. It was the first time a car in that market segment was based around such a strong and lightweight racing car engineering solution and the first time any car has ever featured a one-piece carbon-fiber structure.

The interior of the car featured the same expensive materials show-off with carbon fiber, leather, and aluminum. Behind the seats, the car-maker installed a shelf to store items, even though the engine underneath it heated it. The instrument cluster featured a center round tachometer and two LCD screens on its sides. A touch-screen infotainment unit was mounted on the center stack.

The engine was a 3.8-liter V8 offered in two output versions, 600 and 625 hp, respectively. It was mated to a standard 7-speed automatic transmission with a dual-clutch system.