Mercedes-Benz launched a complete lineup for its C-Class range in 2014, completing its lineup in the following two years.
In 2018, the whole range was facelifted.

The 2016 Mercedes-Benz C-Class Cabriolet was the first convertible in the C-Class family. Previously, the C-Class platform was used for the CLK cabriolet. After two generations named CLK, the German car-maker decided to introduced a soft-top vehicle with the C-Class badge. It was the first time when that range featured four bodyworks: sedan, station-wagon, coupe, and convertible.

In 2018, the C-Class was refreshed. Despite being only a couple of years old, the convertible followed the trend and got the new goodies from its brothers. The most important changes on the outside were done on the front and tail end with the new design for the headlights and taillights. For the front, LED headlamps were fitted as standard and there were other two choices for extended range (Multibeam and Ultra Range).

The interior benefited from new integral-look seats with an overall sporty look. The center console was characterized by new materials and a new design. For the instrument cluster, the car was fitted with standard dials, but there was an option for a full-digital system. A good improvement was that the cabriolet the soft top could have been operated from the outside with the vehicle key.

The engine lineup was opened by a small, 1.5-liter turbocharged gasoline engine, which offered 184 hp. The top versions for the gasoline units, apart from the AMG versions, offered 258 hp. For diesel version, the C-Class convertible was available with a 2.0-liter unit in with 194 and 245 hp, respectively. A 4-Matic all-wheel-drive was available for the C200 Cabrio. 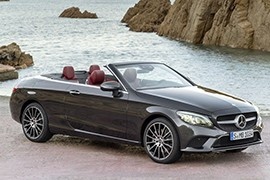