Based on the 2014 Mercedes-Benz C-Class station-wagon (S205), the AMG C63 version was the top-performer of its range.
It offered the highest power and the best technology to make a luxury car goes faster. It was launched in April 2015.

The C63 AMG was the most successful model of AMG vehicles. The second generation lost the naturally aspirated V8 in favor of a twin-turbo 4.0-liter engine. Unlike its rival, the M3, it was also built as a station-wagon, or T-Model as it was named.

When compared with its siblings from the C-Class T-Model, it featured a more aggressive styling. The wide and short grille with the big badge supported by the twin-aluminum wings. The car had to look aggressive but, in the meantime, its aerodynamic was with a purpose. A chromed “V8 BITURBO” chromed badge was installed on each of the front fenders. The longer roofline was sloped toward the back and on top of the tailgate, it featured a roof-spoiler with the third stop-light.

Inside there were sport-bucket seats for the front passengers. The instrument cluster featured two analog dials with a carbon-fiber background. Between the binocular look of the gauges, there was a small TFT display for the on-board computer. For the rear passengers, there was more headroom than in the sedan version. The trunk space could have been extended by folding the split backrest of the bench.

Under the hood, the C63 T-Model was offered in two versions: C63 and C63S. Both featured special suspension with adaptive dampers and the AMG SPEEDSHIFT MCT 7-speed sports transmission. The dynamic engine mounts were fitted as standard on the more powerful C63S and offered as an option for the non-S version. 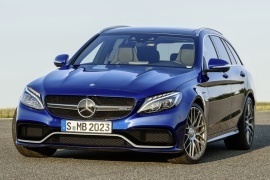