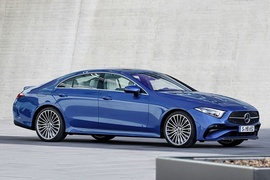 Mercedes-Benz unveiled the facelifted version of its four-door coupe CLS in 2021 and brought new options and improved features.
After 450,000 units sold globally since the first generation’s launch, the CLS proved to be a fair bet for the three-pointed-star brand. Even though it didn’t offer enough headroom for the rear passengers or large trunks, the CLS was in high demand.

The 2021 CLS featured a redesigned front fascia with an AMG-style front bumper fitted as standard. It sported a black A-shaped wing, a front splitter in silver chrome, and a 3D radiator grille. From its sides, the AMG side sills. In the back, the carmaker left everything unchanged, with the same diffuser between the rhomboidal-shaped exhausts.

Inside, the carmaker’s most significant change was the infotainment system, which came with two 12.3” screens fitted as standard. They shared the same glass-covered area that made them looked like a widescreen. A touch-pad replaced the older controller between the front seats. Mercedes-Benz introduced automatic parking and exiting parking feature, which warned the driver and applied brakes in cross-traffic situations. Like its predecessor, the 2021 model was not a champ for the interior space, especially for those seated in the rear. With its 12 cu-ft (340 liters) trunk, it could barely compete with some compact hatchbacks, but the CLS owners didn’t bother about that.

Under the hood, Mercedes-Benz offered a wide choice of diesel, gasoline, and hybrid engines. The base levels introduced two inline-four turbocharged powerplants that sent the power to the rear wheels only. The range-topper was the three-liter inline-six helped by an electric starter-booster that sent 367 hp in all corners. A nine-speed automatic gearbox was standard for the entire range. 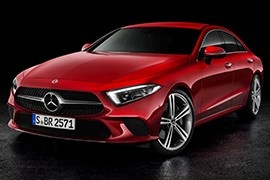 Mercedes-Benz brought back the faux-coupe vehicles when it introduced the CLS in 2003.
In 2018, the four-door coupe reached its third generation.

The CLS was an instant hit, and soon all the major players in the Premium segment started to work on a competitor for it. BMW brought the 6-Series GT, Jaguar introduced the XF, and Audi launched the A7 Sportback. But the original was the CLS, a real trendsetter of its times. But the credit for the first four-door coupe was the 1962 Rover P5B. Fast forward to 2018, and Mercedes-Benz unveiled the third generation of the CLS.

It was designed as a coupe with long, sleek lines and a narrow front end with LED headlights. Its raked A-pillars, arched roof, and sloped C-pillars formed an unmistakable coupe look. In the rear, the carmaker included the LED taillights as standard. The purists were outraged even when the first-generation was introduced, but the customers bought it. It was like a sport-sedan but larger, more refined, and more luxurious.

Inside, it was a genuine Mercedes-Benz in terms of luxury and safety systems. There was little headroom in the back, but that was not a concern for the owner, who usually sat behind the wheel. For the 2018 model, the German carmaker offered two 12.3” displayed behind a continuous glass cover, to look like a wide-screen where the CLS showed the instruments and infotainment system.

Under the hood, the three-pointed star brand included a small engine choice between 286 hp and 367 hp. The AMG versions were treated differently. 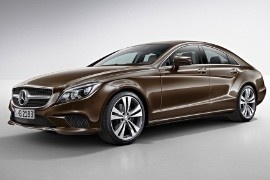 For 2015, the Mercedes-Benz CLS Coupe and CLS Shooting Brake got a new face to match with the automaker’s incremental design iteration, heavily influenced by the S-Class W221 flagship.
On the outside, you get a redesigned front end, a reshaped grille, new LED headlights with an optional Multibeam setup, a new lower bumper with bigger side vents as well as new wheels, slightly adjusted LED taillights and rear bumper, all perfectly combining contemporary luxury with passionate sportiness.

There are no major changes inside as far as design goes, but you do get a new generation of the Comand infotainment system with apps like Weather, GoogleTM Local Search with StreetView and Panoramio as well as an enhanced navigation system. A new pack of services is available for the European market called the “Mercedes connect me” and offers emergency call support, accident, maintenance and breakdown management. On the powertrain sideM the refreshed second-generation CLS comes with a new four-cylinder diesel engine (CLS 220 BlueTEC), a turbocharged V6 gasoline engine (CLS 400) and a new 9-speed automatic transmission that replaces the old 7 G-Tronic seven-speed. Just like its predecessor, the new CLS is available with both rear-wheel-drive and all-wheel-drive depending on engine version, including the CLS 63 AMG models. 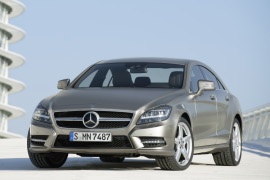 The biggest four-door coupe from Mercedes-Benz got a refreshed version for the 2010 model, and it brought more luxury to that specific niche market of the premium segment.
Mercedes-Benz might not be the first carmaker that built a four-door coupe, but it was the most successful when it introduced it in 2004 and relaunched a segment that was forgotten for decades. In 2010, it unveiled the second generation, which was refreshed in 2014.

The most striking feature of the facelifted version was the headlights, with LEDs instead of bi-xenon headlamps. A horizontal satin-silver slat spread across the black grille made the car looks sportier, while the apron with the A-shaped air intake in the middle resembled the SLS AMG. Its LED daytime running lights from the side-scoops looked suspended in over the black mesh-grille behind them.

Inside, the carmaker installed a slightly wider interior with more elbow and shoulder room. For the first time, the CLS was fitted with an EASY-PACK quickfold as an option for the rear seat backrest. That allowed longer items to be loaded through the 520 liters (18.3 cu-ft) trunk.

Under the hood, Mercedes-Benz installed a choice of four engines, apart from those offered by the AMG department. All versions were fitted as standard with a seven-speed automatic (dual-clutch) transmission. The CLS was available with rear- or all-wheel-drive, depending on the engine. 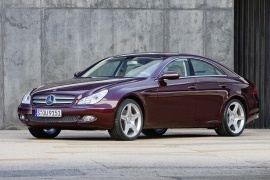 Mercedes-Benz brought back to life the four-door coupe vehicle styling in 2005 when it launched the first generation of the CLS, a model which was facelifted in 2008.
The four-door coupe was a name given by Mercedes-Benz to its CLS, but the body style was not new. The 1962 Rover P5 Mark II is considered to be the first four-door coupe. But it was the same with the hamburgers, which were not invented by Americans. They came from Hamburg, which is in Germany. But the definition worked and evoked a car with doors in the back, but with a sloped roof and a coupe-like shape.

Back in 2008, the CLS was upgraded. When it launched the car, the German car-maker did a leap of faith, not knowing if the car will have success or not. The sloped back seriously cut the headroom for the rear passengers. For the 2010 model, the car received new headlights and a new grille. A new set of LED turn-signals were installed in the door mirrors. The taillights were fitted with LEDs as well, and a dynamic light mode was created for the rear turn signals. The rear bumper was bigger and it was lowered to the center.

Inside, the car featured a new three-spoke steering wheel and a new 2.5-NTG telematics system. There were another two infotainment systems available, one with a 5” monitor and another one with a 6.5” respectively. A Linguatronic, voice-command system was added for the latter.

The 2008 model had to receive new engines and the entry-level was named 280 and it was a new, 3.0-liter V6 engine that offered 231 hp. All models were fitted as standard with the new, 7-speed, automatic gearbox. 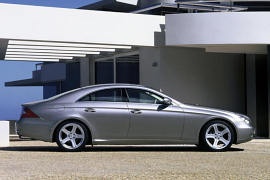 Even though it was not the first four-door coupe on the market, the car revived the forgotten trend of faux-coupe bodyworks.
Rover introduced the Rover P5 in 1962 as a four-door coupe, with a sloped rear end and a styling that resembled sporty vehicles. That trend didn’t last too long since it wasn’t as practical as a regular sedan. Still, the idea remained and, in 2004, Mercedes-Benz brought it back to life in the form of the CLS lineup.

Mercedes-Benz unveiled the CLS range in 2004, and it was based on the Vision CLS concept-car showcased at the 2003 Frankfurt International Motor Show. The narrow front with swept-back headlights made it into production. Its raked windshield was similar to that of a sporty coupe, but the car featured four doors. Its frameless windows amplified the coupe sensation. Yet, it featured a B-pillar, unlike the former fake-cabriolets, due to safety reasons. In the back, the windscreen was almost on the same line as the sloped trunk lid.

Inside, the CLS featured four seats only with low-mounted seats. Its dashboard design and steering wheel were similar to the ones installed in the CLK range. Mercedes-Benz tried to offer the CLS as a coupe version for the S-Class, while the CLK was the coupe for the E-Class (W211) even though the latter was based on the W203 C-Class. Its luxurious interior was fit for the luxury car buyers, but the rear seats offered limited headrooms, where a six-footer (1.85m) could barely sit.

Since Mercedes-Benz built the CLS on the W211 (E-Class) platform, it used some of its engines and drivetrains. It took only the V-6s and the V-8s units and paired them to either a six-speed manual or the new 7G-Tronic automatic gearbox.