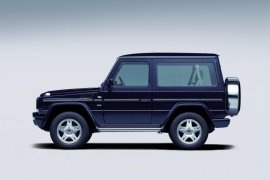 Having undergone several other plastic-surgery procedures as of 2000, the 3-door vehicle was systematically upgraded to better suit its exclusive customers’ desires.
Improvements include full-time 4-wheel drive, electronically locking differentials, ESP and brake assist to name only a few. Larger engines were introduced, such as the 5.0L and 5.5L petrol units while safety was enhanced through the likes of TeleAid system which automatically dials emergency numbers in the event of a crush. Moreover, the device is mated to a GPS sytem that locates the vehicle with pinpoint accuracy, providing authorities with sufficient data for a speedy interception. 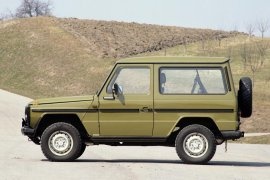 The Mercedes-Benz G-Class is one of the all-time classic vehicles that became iconic in the car industry.
It started as a 3- and 5-door (wagon) body version.

The Shah of Iran, Mohammad Reza Pahlavi was one of the significant stake-holders of the Mercedes-Benz and he suggested making a civilian version of the military vehicle G-Wagen. The project started in 1972 and Mercedes-Benz and the Austrian special vehicles manufacturer Steyr worked together for this. In February 1979, the first G-Wagen rolled out the factory.

The brick design of the G-Class was easier to manufacture. The door hinges were exposed and the overall vehicle looked like it was built from flat sheets of metal. But that was the idea, to look sturdy and rough. The three-door version offered limited room for the rear seats, but it offered better handling in hard terrain. The shorter wheelbase made it more agile. It was the base model for the cabriolet version as well. The G-Class won people’s hearts due to its reliability and go-anywhere ability.

Inside, the first models didn’t offer too much comfort. The air-conditioning was not available. The instrument cluster featured a center-mounted tachometer, the speedometer was on the left and a third, round, dial was used for several other gauges. Under the rev-counter, there were installed the warning lights for the locking differentials.

The body-on-frame construction allowed a lot of improvements over time. But, from the start, it had live solid axles front and rear and three lockable differentials, which was something unique on the market. 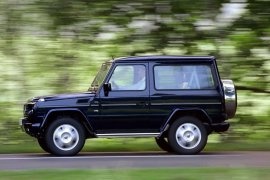 The original W460 platform was replaced by the W461 in 1991.
Improvements saw the introduction of all-wheel disc brakes while the engine range was reduced to a choice of one petrol engine and one Diesel plant. Several years after the introduction of the new chassis, the vehicle was updated was once more, having received both exterior and interior minor retouches. Although the G-Klasse is unanimously regarded as a universal 4X4, it was only the future W463 platform that saw the introduction of permanent 4-wheel drive while W460/461 models had a rear-wheel drive layout with an option for manually shifting to 4X4 mode.