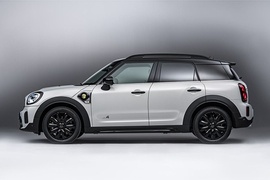 The biggest MINI on the market was the Countryman, and it was introduced in 2010.
The second generation came in 2017 and received a facelift in 2020.

Despite being a crossover, the Countryman still resembled some details connected to the original MINI. Apart from the headlights and the “fridge-doors” in the back, it offered new possibilities for its owners.

There were just a few details that could tell the difference between the 2017 and the facelifted, 2020, model. On the front, the LED headlights were fitted as standard and not an option for the non-facelifted model. An adaptive headlight system was on the options list. The rear apron was redesigned in the back, and the taillights showed a brighter Union Jack light thanks to the LED system. A distinctive aerodynamic package enhanced the sportier look of the Cooper version.

While most of the range showed a stylish design, the Countryman featured a more practical approach. For instance, it was available with a bigger trunk and split-fold 40:20:40 rear bench. With all seats folded, the total luggage volume was increased from 450 liters (15.9 cu-ft) up to 1390 liters (49 cu-ft). The MINI Cooper S Countryman, MINI Cooper SD Countryman, and MINI Cooper SE Countryman ALL4 models were featured as standard Piano Black interior surfaces for the cockpit and door bezels.

Under the hood, MINI offered Euro 6d engines only, and some versions were available with automatic transmissions only. The plug-in hybrid version received a bigger battery pack for better fuel-efficiency. 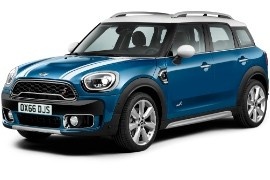 When it was launched in 2016, the MINI Countryman was the biggest MINI ever made by the British manufacturer.
It wasn’t that mini-vehicle anymore.

The MINI customers started to ask for roomier interiors and real seating for at least four adult passengers. A 5-door MINI was brought on the market and it was loved and hated at the same time. It wasn’t a MINI anymore, but it wasn’t something else either. Then, the Countryman was shown and that shut some critics away. The crossover and SUV market grew fast after the year 2000 and a MINI Crossover was better received than a simple, 5-door MINI.

From the outside, the Countryman was unmistakable. It was clear that it belongs to the MINI brand. The front fascia, with the rather angular headlights and the specifically shaped grille, were kept. The extended roof and the addition of an extra pair of doors transformed the MINI into a family SUV. It even received an all-wheel-drive system, named All4 for the Countryman. All of a sudden, the car was not competing into the small-segment but rather into the small-SUV market against the Audi Q2 and the Nissan Juke. Unlike its sibling, the Clubman, the Countryman featured a single-piece liftgate. The flared wheel-arches with black plastic trims enhanced the off-road appearance.

Inside, the dashboard featured the typical MINI design, with a big, round, center-mounted screen for the infotainment unit and the speedometer. In front of the driver, there was a round analog dial and a side smaller panel with warning lights. In the rear, there were sliding and reclining seats for the outboard places.

The Countryman was offered with a choice of diesel and gasoline engines, with front or all-wheel-drive, with manual or automatic transmission. 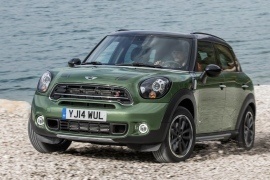 The MINI was not that small anymore and the customers always asked for more.
And the Countryman version was just about what some of them asked: a small crossover vehicle.

After it was kept by BMW to represent them in the small-size premium segment, the MINI brand started to pick-up speed. At first, it was just another small-size vehicle, with a Chrysler engine in it. Then, it was powered by BMW-PSA jointly developed units. After that, the all-wheel-drive came into the equation and the MINI became a crossover.

It was taller, longer, and roomier than its stablemates. It featured new headlights and black molds on the wheel-arches to emphasize the off-road look. It wasn’t an off-road vehicle though, but it mimicked one. The tailgate was curved and vertical. Since the car proved to be successful on the U.S. market, the car-maker mounted the rear lights on the fixed rear quarter panels.

Inside, the MINI Countryman offered room for four adults, with easy access through the rear doors. In the back, there was a bigger luggage compartment and, if there was more room needed, the rear seatback could have been folded completely or just in a split way. The only problem for the rear passengers was the transmission tunnel. Other than that, it offered a decent amount of legroom and headroom. 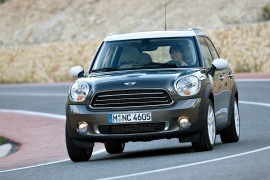 The original MINI was released in the 60s’ at it was driven and loved by everyone.
Each member of The Beatles had their own MINI.

However, people needed a more practical car, with 5 doors. That’s what also happened in 2010 when BMW decided that it was time to enlarge a the mini car.

The Mini Cooper Countryman was rather a small crossover in direct competition with the Nissan Qashqai.

The dimensions were changed, the Country Man being 10cm wider and 15cm taller, becoming the biggest model Mini ever released.

The Countryman was safer, more spacious and great on longer distances. It kept the Mini’s driving feel with the quick steering and instant feedback.

The perfect 50-50 distribution front to rear made a well-balanced crossover that did well in turns - not as well as the 3-door Mini, but close.

The exterior design was minimal, while everything has been upscaled. The wheels were pushed out to the extremities for better handling.

The Countryman offered a variety of diesel and petrol engines that were mated to either a 6-speed manual or a 6-speed automatic gearbox.

The interior design was pretty much the same as the standard Mini, with the chrome tipped switches all clustered together. The center of the dashboard was occupied by a color screen on which you could check several information.

Space wise, the rear seats could easily accommodate grown ups - a rear bench was also available. The reclining rear seats were a plus for the passengers or the trunk space.

Through the middle of the rear seats, an optional centre rail was available, where items could be clipped.

The trunk was double the size of the Mini and the rear seats were also foldable, thus the load area could be increased.

Safety wise, the Countryman was equipped with ESP, 6 airbags, a tyre pressure monitoring system and others.