It was a shy entrance into the electric car era for Mitsubishi and the Japanese carmaker couldn’t have made it on its own.
Mitsubishi went for an alliance with the French manufacturer PSA (Peugeot-Citroen). Thus, the triplets of i-Miev-iOn-C-Zero appeared on the market. All three models were the same vehicle with different badges.

The base vehicle was the Japanese Mitsubishi i, which was sold in Japan as a Kei car with an internal combustion engine. Mitsubishi changed the engine with an electric motor, threw the fuel tank away and installed a battery pack. This is how the i-MIEV was born.

Launched right in the middle of the world economic crisis, the i-MIEV didn’t have much success. The world was not ready for the electric car revolution back then and the model’s price was sky-high for a tiny, 3.47 m (11.4 ft) long vehicle.

Inside the egg-shaped vehicle was enough room for four people and a trunk large enough to squeeze a six-pack.

For that time, the biggest advantage for the i-MIEV were the running costs. The vehicle could be fully charged from a regular wall outlet. The 12.5 kWh battery too about 5 long hours to charge from 0 to 100 percent. The electric motor developed 49 kW and could pull the car up to a top speed of 130 kph. It used a single-speed transmission to get along and more programs for driving plus a B-mode, which the driver could use for powerful regenerative braking. 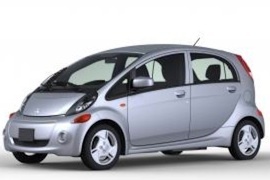