After the successful introduction of the 2007 Lancer generation, Mitsubishi tried its luck with a hatchback version unveiled in 2008.
Finally, the Japanese carmaker could use the Lancer nameplate globally. Before the 2007 version, it had to use Carisma on the European market, where it was a very appreciated car, but the name was not the one expected by its fans. Since the car was not available as a station wagon, the Japanese carmaker introduced a hatchback named Sportback.

Inside, the dashboard was clean with two-round clusters on the dashboard. Depending on the option, an infotainment system with Bluetooth connectivity, a navigation system, and a USB aux was available. In the back, the carmaker installed a 60/40 split-folding rear bench which increased the trunk size from 344 liters (15.14 cu-ft) to 1,349 liters (47.64 cu-ft)

The Lancer was available with various engines, starting with a 110 hp 1.5-liter naturally aspirated engine. Another 1.8-liter was available. Since the European customers asked for diesel engines, Mitsubishi installed a VW-supplied 2.0-liter TDI unit. On top of that, Mitsubishi offered a special version named Ralliart, which was a de-tuned Lancer Evolution with an all-wheel-drive and automatic (dual-clutch) gearbox. 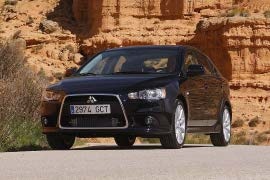