After joining the Renault-Nissan alliance, Mitsubishi received huge help from its former competitor and introduced the fourth generation of the Outlander in 2021.
Mitsubishi was caught off-guard by the 2007 world financial crisis and, even though it survived, it couldn’t make a new lineup that could save the brand. Most of its vehicles were old, and, apart from the L200 pickup and the Outlander, the rest of the rang struggled to survive on the market. After a few troubled years, Mitsubishi ended up in the Renault-Nissan alliance, and the first new product developed together was the Outlander.

It was a new design language for Mitsubishi. The Outlander featured LED lights on top of the front fascia, with squared LED headlights mounted on the sides, above the bumper. Its broad, shield-like, chromed grille with three slats on the upper side and a black squared area were unusual for the Japanese brand. From its sides, the blacked-out B-pillar and the D-pillar shape gave the impression of a floating roof. Mitsubishi kept the split tailgate system that made it famous in the compact SUV segment.

While the exterior was flashy and daring but not luxurious, the interior was a different story. Depending on the trim level, the Outlander featured cloth or leather seats and a premium interior feeling. Its gear selector was small and placed on top of a tall center console. A large display filled the instrument cluster while an additional touch-screen made it on top of the dashboard, above the center stack. Like its predecessors, the Outlander’s fourth-generation provided room for seven people, with two folding seats in the trunk.

At the launch, the Outlander was available exclusively with a newly developed 2.5-liter gasoline engine paired to a CVT that sent the power in all four corners. 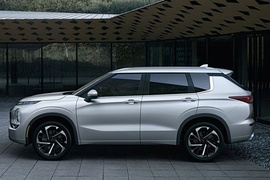