The fourth generation of the Pajero/Montero/Shogun broke its chains and stormed the Mitsubishi Motors booth at the 2006 Paris Motor Show.
Depending on the market, the biggest Mitsubishi off-road-er wore the Montero/Pajero/Shogun name. While it wasn’t a revolution over its predecessor, it was a clear evolution that brought the car closer to its customers. Its only drawback on the European market was it’s over three-liter engines led to higher taxes, leading to slow sales.

The flared wheel arches and the sloped roofline were unusual for a proper off-road vehicle. Its flared wheel-arches created a muscular appearance for the Japanese off-road vehicle. In three-door shape, the rear side windows featured an ascending lower margin between the B- and the C-pillars. Like its predecessors, the Pajero’s fourth-generation kept its spare wheel on the rear, side-hinged door.

Inside, the Pajero featured a newly designed dashboard with a big instrument cluster. The center stack hosted the infotainment unit and an additional LCD for the onboard computer. At the front, Mitsubishi offered enough room for two occupants, but there was little room in the back, even for two passengers.

The technical platform was the one that brought the Pajero under spotlights. It was the only 4x4 vehicle in the world that featured a 4x4 on-demand system which could have been driven as an all-wheel-drive vehicle since it was fitted with three differentials. The central and the rear one could have been locked for better traction. For the engine bay, the manufacturer installed either a 3.2-liter turbocharged diesel or 3.8-liter gasoline. Both versions were mated as standard with a 5-speed manual, while a 5-speed automatic was available as an option. 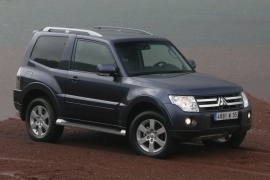