A classic look, a powerful V8, and a steering wheel attached to a bare-bone car with a classic look.
That was the 2012 Morgan Plus 8, a roadster that didn’t have competition.

The Morgan Plus 8 was an evolution of the Morgan Plus 4. In 1968 a V8 version appeared with a Rover engine that was purchased from GM in 1967. It was installed on a wooden chassis. In 2012, that couldn’t work well. So, the 2012 Morgan Plus 8 had an aluminum chassis, a BMW V8 engine, and an optional Steptronic, 6-speed automatic transmission.

The car was not for those who were looking for a state-of-the-art new vehicle with 100 nannies under the skin to help them run into a straight line. It was a car that showed the world the true meaning of “timeless design” expression. With its long hood and flared, ample, fenders, it defied the design trends in the way that a tuxedo defied the denim jeans. There was no trunk in the Plus 8. Only a storage compartment behind the seats where some could fit a handkerchief.

In the cockpit, there were the bare necessities: two bucket-seats, a steering wheel with airbag, and two large dials on the dashboard. The audio system was provided by Alpine. It was the highest quality sound system someone would buy in a car that wasn’t meant to drive with the radio on.

The hand-built aluminum bodywork was feather-light. Its 1100 kg. (2425 lbs) unladen weight made the Morgan Plus 8 the world’s lightest V8 car in the world. Under the timeless design, there were new Brembo brakes and fully independent suspension. And no, it didn’t have any traction control. It featured ABS and that was it. 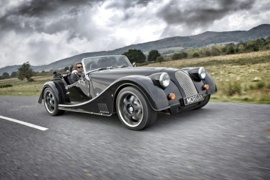