Nissan marked the 50 years of GT-R badge with the introduction of a revamped GT-R Nismo.
This race-inspired street tuned machine made its world debut at the 2019 New York Auto Show. And Nissan put a lot of effort into making this GT-R fiercer then ever.

Lighter means faster and this is what was the main goal of Nismo engineers. They shaved nearly 70 pounds from the car’s weight by replacing bumpers, side sills, roof, hood, front fenders and rear spoiler with carbon-fiber elements.

Under the hood they used pretty much the same 3.8-liter V6 24-valves engine, but with some improvements. The turbochargers are borrowed straight from the GTR GT3 race with slight modifications. It has less fan-blades, but a different shape. Thus, the engine didn’t lose power nor torque, but cut the turbo-lag.

As before, the GT-R maintained the same AWD architecture and a 6-speed dual-clutch gearbox. But it wasn’t left with the same software and it changes gears even faster and smoother, making the car faster after the apex. The suspension is tuned for better roadholding, with little compromises on the comfort area. For brakes, Nissan trusted Brembo and installed a new set of carbon silica carbide structure rotors that can resist temperatures up to 1832 degrees Fahrenheit (1000 Celsius). 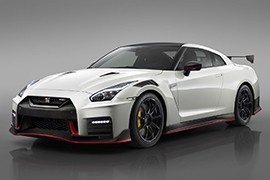