Nissan unveiled a facelift for the Patrol range in 2014, and it brought several updates for it, especially for its look.
On some markets, the sixth generation of the Patrol was the biggest Nissan on the offer. Due to stricter emission regulations and low market potential, the Japanese carmaker dropped it from the offer. The European customers were left behind in teary eyes for the big SUV, while the Australians were unhappy since there was no diesel option. Nevertheless, the Patrol was still one of the best off-road vehicles, and its main playground was the wide-open desert.

The design team tried their best to make the Patrol Y62 look smoother, but it was like trying to reshape a brick with a nail-polisher. Somehow, they succeeded in implementing a new bumper that was curved upward towards the headlights. It’s new LED daytime running lights and the massive, three-parts chromed grille was imposing and resembled the previous Patrol models. The front fenders air-vents from the sides were elongated and still made some people wondering if they were used for something other than design. They could if the owner modified it.

Inside, it was the same large barge with room for up to eight people with impressive headroom, even for the versions fitted with a sunroof. The carmaker did the interior with luxurious trims such as heated and cooled leather seats, wood-trims, and an infotainment system carried over from the Infiniti squad.

Under the hood, Nissan installed only V8 gasoline engines. Their fuel-efficiency was down the drain, but their performances were remarkable, especially for the full-options version that featured a Mercedes-Benz 7-speed automatic (dual-clutch) gearbox. 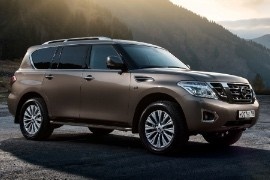