Nissan started introduced the Sentra SE-R in 1990, and it was so successful that it continued it on the following versions, and the sixth generation of the model made no exception.
While in the ’90s was a light sub-compact car, available as a coupe, by 2006, the Sentra grew up to the mid-size segment. It wasn’t that agile anymore. It was considerably larger than its predecessor, but the SE-R package remained, sending the car into the sport-sedan class. Worth mentioning that it wasn’t available as a two-door version.

With its aggressive front styling, the Sentra SE-R looked like it would kill all the cars in front of it. The bumper sported a wide center grille flanked by two air-scoops on the sides as the driver needed them to cool the brakes on a track day. The main black grille featured the Nissan badge in the middle while its headlights were extended over the hood.

Inside, the SE-R showed unique features such as a G-meter on the center stack, which showed the lateral acceleration. The bucket seats were considerably sportier and did a better job holding the front occupants in place during high-speed cornering maneuvers than the standard seats in the regular Sentra. But since it was built as a daily driver, Nissan installed a standard CVT on the car with the gear selector on the center stack.

The SE-R’s most important part was under the bodywork. First of all, it featured disc-brakes in all corners and standard ABS. The regular SE-R got a 180 hp engine paired as standard to a CVT with an option for manual changes with seven pre-selected gear ratios. But the most thought-after version was the SE-R Spec V, which provided 200 hp from the same 2.5-liter four-banger, and it was paired to a six-speed manual. 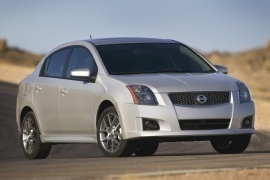