Nissan unveiled a new generation of its Z-saga in August 2021 with a new model, which marked a return to the turbocharged engines like the older 300ZX from the ’80s.
The history of Nissan’s Z-cars started in 1969 with the Nissan Fairlady Z, marketed outside Japan as Datsun 240Z. It soon became a cult car thanks to its nimble handling and elegant, sporty lines. While in the beginning, it was a sporty coupe with not too many features, the seventh generation introduced in 2021 was a completely different story.

Its lines resembled those from the Z-Proto concept car unveiled in early 2021. Its long hood and short deck were already a design trademark for the Z-cars, and the Z400 followed it. A pair of LED headlights with half-circular DRL’s resembled the older, round headlights of the first Fairlady. The new 3D LED taillights and the rear combination lamps combined modern technology into the aesthetics reminiscent of the Z32 300ZX.

Inside, the vintage-look design was enhanced by new technologies such as the 12.3” display in front of the driver complemented by the infotainment’s touch-screen from the center stack. On top of the dashboard, a cluster with three analog dials showed data regarding the turbochargers and an ammeter.

But the most important part of the car was under the hood, where Nissan dropped a twin-turbocharged 3.0-liter V6 powerplant. Its 400 ponies were sent to the rear wheels via either a six-speed manual or a nine-speed automatic. A clutch-type limited-slip differential provides the much-needed grip for perfect launches. 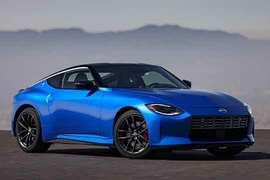