The Opel Astra Sedan was launched at the 2012 Moscow International Automobile Salon.
Its siblings with three or five doors were already on the market since 2009.

While the compact-class was dominated by hatchback vehicles, Opel saw a big interest in the sedan-segment in the East European market. After a good experience with the Opel Astra Sedan H, it introduced the three-box version in the Russian market and, later on, that year, it extended it into other markets where that kind of bodyworks was attractive for customers.

The Astra J, or the fourth generation of the compact Opel, the sedan was similar to the 5-door hatchback up to the B-pillar. The roofline descended behind the rear seats to the trunk lid. The rear taillights featured the same design language with the headlights and were different than those installed on the 5-door version.

Inside, while the front seats and dashboard were the same with the 2009 Astra lineup, the rear seats were different and offered slightly more room for the rear passengers. The trunk was opened from the keyfob or via a dedicated button on the trunk.

The Astra Sedan featured different engines, depending on the market. It was sold under the name Buick Excelle GT in China or Buick Verano on the North American Continent. 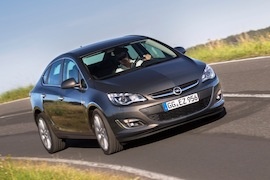