Opel brought back the GSI badge from the past and installed it on the second generation of the Insignia.
It might be called a blast from the past, but the GSI badge always said something more to the Opel enthusiasts than the OPC one. Even though the fuel injection system was no longer a new technological achievement, Opel still relied on that badge to get to its fanbase’s harts. Moreover, it didn’t want to disappoint them.

Built as a hatchback, the Insignia GSI distinguished itself from its brothers with a sportier, more aggressive styling. The silver rims on the side-scoops, the 3D mesh-grille, and the little wing in the back were signs of a sporty character. For high-speed cornering, Opel lowered the suspension by 10 mm (0.4”) compared to a regular version.

Opel designed a new set of sport-bucket seats with integrated headrests for the front passengers. They were specially made for the Insignia GSI and not available for the rest of the range. As an exclusive standard feature, the leather-upholstered interior sported contrast stitching. But the Insignia GSI was also a practical vehicle. Its trunk could have been expanded from 490 liters (17.3 cu-ft) to 1,450 liters (51.2 cu-ft) by folding the rear bench seatback.

Under the hood, Opel installed a 2.0-liter turbocharged engine that provided less power than the previous Insignia OPC and claimed that the car was faster on the Nurburgring race track by 10 seconds, thanks to its lower weight and better mass distribution. The all-wheel-drive system featured a dual-clutch for the rear axle controlled by a computer and mimicked an LSD. 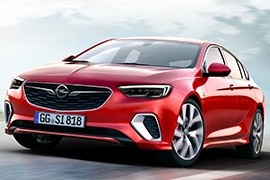