Even though it was facing an uncertain future, with negotiations being held between General Motors and the Russian Economic Bank – Sberbank, Opel remained true to its customers and offered the OPC version

The three letters meant more performance for, otherwise, normal daily drivers.
Most of the Opel products had an OPC version, for those who didn’t want just a regular car. And it wasn’t only about the performance. A part of the modifications was made to the car’s appearance.

The Insignia OPC featured a bigger front bumper with a lower apron and big air-intakes in the middle and on the sides, with satin-silver color for the grille and side scoops. A set of big, 19” light-alloy wheels was installed. The ground clearance was reduced with 10 mm (0.4”) than the standard version. In the back, the redesigned bumper revealed two large exhausts on the sides.

When compared with the standard Insignia, the OPC featured sport-bucket seats and standard leather upholstery. On top of the center stack, the manufacturer installed a standard color monitor for the infotainment system, which included the navigation as well.

The powertrain offered a twin-turbo V6 engine mated to a standard six-speed gearbox. The all-wheel-drive system featured a Haldex center and an electronic limited-slip rear differential. For higher cornering speed, the car featured adaptive dampers. A Brembo disc-brakes system was fitted as standard. 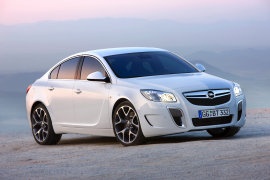