Released in 2005 at the Geneva Motor Show, the Pagani Zonda F was a good mix between safety, luxury and performance.
Considered the first car to feature an exclusive natural carbon fibre bodywork, the Zonda F was also fitted with an extremely powerful V12 Mercedes engine.

Similar in design with the Honda S 7.3, the F featured slight changes as the repositioned side mirrors, refreshed lower rear vents and a new vent added on the top of the rear quarter.

At the rear, the F features a single piece spoiler instead of the usual two-piece unit Pagani used us with.

The interior was unexpectedly luxurious resembling designs paired with ultra luxurious vehicles such as Bentley or Rolls Royce. Red leather with diamond quilted patterns used for the chairs and the floorboard, as well as leather accents on the steering wheel combined with wood trims.

While the F was offered with a 7.3-liter V12 unit, it was available with two different power options: 602 hp or 650 hp, the latter coming with a longer intake manifold to make it more powerful.

The longitudinally-mounted engine was mated with a 6-speed manual transmission through which the power was sent to the real wheels.

Steel brakes were standard, however, carbon-ceramic brakes were optionally offered with 6-piston Brembo brake callipers up front and 4-piston out back.

One of the few rivals on the market could have been the Ferrari Enzo, with a 6.0-liter V12 engine that developed 660 hp and 485 pound-feet of torque. 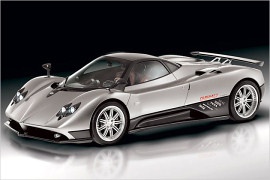