The Malaysian brand Perodua introduced the Bezza in 2016 as the company’s first sedan, and it added a refreshed version just three years later, in 2019.
Perodua built the Bezza, in a specific trim level, as the safest car built by the Malaysian carmaker and obtained a five-star rating at the ASEAN (Asian NCAP) crash-test. While Perodua shared its underpinnings with Daihatsu and the engines were Toyota licensed, the rest of the vehicle was developed in-house by the Malaysian top-selling brand.

The 2019 version came with plenty of modifications to the bodywork. At the front, the carmaker installed LED headlights and a new front fascia. Its grille and front bumper went through a cosmetic change that brought a more aggressive styling. On the sides, the power-retractable door-mirrors with incorporated turn-signals became available as an option.

Inside the cabin, the Bezza featured a modern-looking dashboard design, with a silver trim that crossed it from door to door and a raised rim above the center stack. Its new infotainment system included a navigation system paired to Android phones only. A new addition was the front bucket-seats that offered an option for leather upholstery.

Under the hood, Perodua installed the 1.0-liter and 1.3-liter gasoline engines. While the first was paired as standard to a five-speed manual and an option for a four-speed automatic, the latter was available exclusively with an automatic transmission. 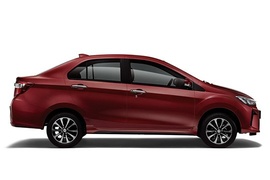