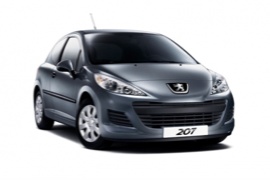 In 2009, Peugeot started to modernize all its vehicles in the B2 segment, including the already known Peugeot 207.
The exterior styling was changed: the front was redesigned, chrome detailing was added, and the hatchback and CC version got new rear lights. The cabin received some changes as well, new trims and new designs for the instrument panel, making it more appealing.

With this model, Peugeot worked on reducing the fuel consumption and also focused on reducing the car’s emissions. A gear change indicator was introduced on the manual transmission variants to determine driving in a more efficient way for the environment.

New equipment was introduced for both comfort and safety. Customers could connect their mobile devices through WIP Bluetooth system for call making and music listening. The 207 also came with impulse direction indicators. The production ended in 2012. 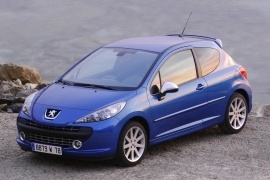 Walking in the footsteps of the glorious Peugeot 205 GTI from the ’80s, the 2007 Peugeot 207 RC was on the market for small-sized hot-hatches with performances and handling that thrilled the new generation of motorists in Europe.
Winding roads, twisty streets, and narrow parking spots are common in Europe. For those who want to enjoy both scenarios of mountain roads and daily driving situations, Peugeot brought back a former model and translated it into a new car: the 207 RC.

The 207 was launched in 2007 and boasts the RC initials to resemble the compact-coupe vehicle RCZ, which was compared with Audi TT. The 207 RC was slightly longer than 4 meters (157.5”) due to the FIA regulations regarding the rally races. The RC was made to be a base-car for further evolution into the rally-racing, to follow the glorious racing past achieved by its predecessors such as the 206WRC, 307WRC and the 205. The feline-style headlights were part of the brand image. An aggressive stance with a sporty front apron and a rear roof-spoiler enhanced the dynamic line of the car.

Inside, the sport bucket seats for the front passengers were complemented by contrast stitching. The instrument cluster was similar to those usually found on a motorbike, with circular chrome-trimmed dials, checked graphics, rounded typography, and red needles.

From the technical point of view, the 207 RC had a different suspension setting, with reinforced McPherson struts in the front and a stiffer torsion beam in the rear. The electric power steering was calibrated according to the sportiness of the car. 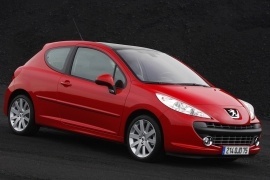 Produced by the French carmaker Peugeot from 2006 to 2014, the Peugeot 207 was a supermini designed to replaced the ageing Peugeot 206.
The then-new Peugeot 207 was based on a modified platform of the Citroen C3 and was available in a massive range of engines, as well as lots of features were offered.

Inside, the Peugeot 207 was designed to offer a welcoming interior with its instrument panel reminiscent of that of a motorbike. The interior space available was unusual for a car in its segment and more likely to be found in a higher segment. Lots of storage spaces were fitted inside the cabin and great features were available depending on the trim level: automatic dual-zone air conditioning, fragrance diffuser, static directional lighting and also a premium JBL sound system.

Safety-wise, the new Peugeot 207 was equipped with 6 air bags and 5 seat belts with force limiters. Pedestrian protection was also taken into account with the vehicle’s front structure and bodywork.