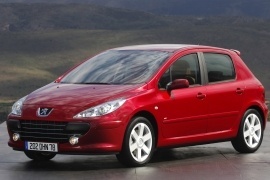 In 2005, Peugeot unveiled a facelifted version for its compact-segment contender, the 307, introducing new engines and mild updates for the bodywork.
With an increasing demand for compact hatchbacks and a constant presence in that segment, Peugeot was confident with the 307. It offered it with four body shapes, including a coupe-cabriolet, a station wagon, and a hatchback with three and five doors. The latter was often considered as “The French Golf”. Its updated version solved more problems noticed on the 2001 model and brought some improvements in more areas.

From the outside, the car featured a front fascia that resembled its bigger brother, the 407 sedan. It showed clear headlights and a smiling grille on the apron, under the black rubber bumper protection. In the back, the bumper got a cut-out for the exhaust, while on the pre-facelifted version, the pipe was shorter and bent downward.

Inside, the carmaker improved the material quality and the design for the center stack. It also added a new infotainment unit with a navigation system. Also, there were new switches that performed better than before.

Under the hood, Peugeot improved its engine lineup. While it dropped the former 1.4-liter turbo-diesel, it left only three oil-burners in the offer. The most powerful version offered 177 hp for the gasoline engine, unlike the 143 hp top-performer from the pre-facelifted version. 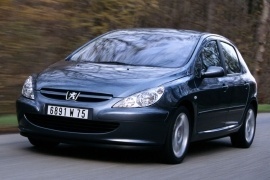 Peugeot introduced the 307 lineup in 2001 as a three and a five-door hatchback, followed in 2002 by the station wagon and the convertible.
In Europe, the compact segment was dominated by hatchbacks, with three and five doors. Peugeot had the 306 in its offer, and it was well-received, but it was no match for most other competitors. When it introduced the 307, Peugeot changed everything. Suddenly, it became one of the best cost-effective cars on the market.

The 307 featured the French carmaker’s new design language, which showed feline-inspired shape for the headlights. While it couldn’t fit a lion nose in the grille, it made it with one horizontal slat and stuck the company badge in the middle. In the apron, the carmaker installed a smiling-shaped grille and a black lip at the bottom. With its wide doors, both front and rear, and the wide C-pillar, the 307 showed a near-premium stance, even though it was priced as a budget car. At the back, the corner-mounted taillights sported a leaf-like shape flanking the tailgate.

Inside, the French carmaker installed two seats at the front and a 60/40 split-folding bench in the rear. Its main concern was to provide decent room for five adult passengers, and it succeeded. Yet, the third middle seat was cramped due to the extended center console. At the front, the higher seats allowed a relaxed driving position. A rounded dashboard with a sloped center stack offered was driver-centered. The silver trims on the door panels, center console, and inside the instrument cluster created an upmarket feeling.

Under the hood, Peugeot offered a wide choice of gasoline and turbo-diesel engines. Most versions were paired with a five-speed manual gearbox, and, for selected engines, a four-speed automatic was on the options list.