While it wasn’t the most powerful version of the 308, the GT offered a very good balance between performance and daily use of a sport-compact hatchback.
Peugeot had a great motorsport reputation, and one of the greatest rally cars ever made was the iconic 205. It wasn’t easy to replace it, but in the end, the carmaker had to move on and introduced new vehicles on the market. It is argued whether the 208 or the 308 was the true successor of that iconic car. In the ’80s, the 205 was considered a compact vehicle. By the 2017 standards, the 308 was in that segment, but the 208 was closer to the original, 205, size.

The French carmaker introduced a facelift for the 308 second generation in 2017, four years after the model’s launch. It sported re-worked bumpers both front and rear, new headlights, and taillights. In the GT version, the car featured 18” light-alloy wheels fitted as standard and a squared filler cap.

Inside, the sport-inspired interior shook with its sport-bucket seats, which looked like they were carried-over from a supercar. Their high-bolstering backseats offered both comfort and side support. Peugeot installed an infotainment screen on top of the center stack, embedded in the dashboard.

Under the hood, Peugeot installed a 1.6-liter gasoline engine that provided 205 hp. The most potent version of the 308 was the Gti, which offered 250 hp from the same four-pot unit. 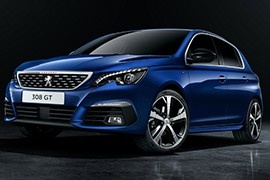