The Peugeot 308 SW GT was the top model of the French carmaker compact-segment station wagon and provided more options than its lesser-equipped siblings.
It was difficult for Peugeot’s design department to upgrade the 2013 model since its customers highly appreciated it. But the carmaker had to improve the car and keep its customers happy. For them, it made a facelifted version in 2017.

From the outside, the most noticeable change was on the full-LED headlights, which were standard on the GT trim level. At the front, a wide grille was installed. Its design was continued on the front bumper. On the sides, the bumper featured two large air scoops. The slightly sloped roof over the trunk area and the low loading height were typical for the 308 SW GT and the SW range.

Inside, the 308 SW GT featured a better infotainment system with a touch-screen on top of the center console, integrated into the dashboard. Peugeot developed the navigation system together with TomTom, and it featured live traffic information. Its infotainment unit featured a screen-mirroring function for both Android Auto and Apple CarPlay. Apart from its SW sibling, the GT also featured a head-up display. A set of sportier seats provided better side support for the front occupants, while in the back, a 60/40 split-bench expanded the trunk when folded from 556 liters (19.6 cu-ft) up to 1606 liters (56.7 cu-ft).

Under the hood, the carmaker installed the most potent powerplant version it had in the parts-bin that could fit inside the engine compartment: a 1.6-liter turbocharged gasoline unit. It paired it with an eight-speed automatic transmission. 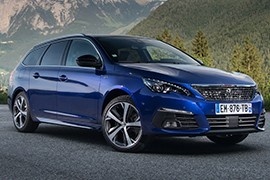