Peugeot didn’t want to quit on their share of large station-wagons on the European market and it announced the second generation of the Peugeot 508 SW in May 2008.
After the initial announcement, the car was unveiled at the Geneva Motor Show, in June 2008. While its predecessor had more like a calm look, the 2018 model offered an angry-looking face with a sporty design. The company’s French management thought that, since there was a bigger concern about environmental issues, the buyers will return to station-wagons from the cross-over and SUV car-categories. So, Peugeot wanted to be prepared and launched its five-door version of the 508.

The 508 SW featured optional LED headlights and two “fangs” that crossed from the headlights through the bumper toward the lower grille. The main grille though was smaller but with a 3D design instead of a mesh. Viewed from the side, the car looked more like a shooting brake than a regular station-wagon, with raked rear D-pillars and a roof-spoiler.

Inside, the i-Cockpit was the name of the infotainment and instrument cluster unit. It was based on two large displays, one in front of the driver and the other on the center console. The luxurious interior was more part of the premium-car market than in the mass-market category.

Despite the long vehicle and sporty look, the 508 SW featured rather small turbocharged engines instead of big displacement units. The standard transmission for some engines was a 6-speed manual while an 8-speed automatic was offered as an option. 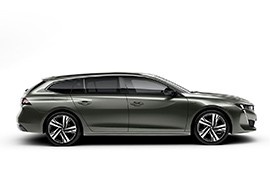