Essentially a liaison Boxster version situated between the 718 Boxster GTS and the hardcore 718 Spyder, the Porsche 718 Boxster GTS 4.0 offers a mix between the comfort and features found on the regular GTS and a detuned version of the engine found in the Spyder. Alongside its hardtop Cayman sibling, it is also one of the last production sports cars with a large displacement engine that doesn’t feature turbocharging or supercharging.

The 400 horsepower flat-six situated right in the middle of the car delivers a healthy amount of torque and no less than 400 horsepower. Paired with a six-speed manual transmission and rear-wheel-drive, the 718 Boxster GTS 4.0 can accelerate from 0 to 100 kph (62 mph) in just 4.5 seconds and has a top speed of 293 kph (182 mph). The roadster comes equipped as standard with Porsche Active Suspension Management (PASM) sports suspension, the Sport Chrono Package and Porsche Torque Vectoring (PTV) with a mechanical limited-slip differential. The screaming flat-six engine can not only rev to 7,800 rpm but can also become a three-cylinder at low loads to vastly improve fuel economy during day to day driving. Also borrowed from the Spyder is the twin tailpipe sports exhaust system, which comes with an integrated gasoline particulate filter for less pollution, especially in the city. 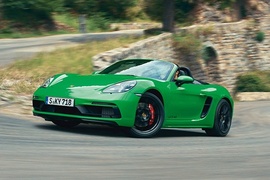