Following the 911 trend, with a Touring model, the Cayman received a similar package for the T-version.
It was fitted with a smaller engine, but able to deliver pleasure on long journeys.

Some sports-cars are better on long journeys than others. They have to deliver a good balance between performance and fuel-efficiency. On top of that, the fun factor is a must for any Porsche. Following the tradition with T-models for the 911, the Cayman/Boxster range was offered with the same Touring line.

The exterior of the Cayman T was slightly different than the regular Cayman. The body-colored vertical struts on the front apron and the black grilles were just a part of the package. Since the car was fitted as standard with the PASM (Porsche Active Suspension Management), the ground clearance was lowered by 20 mm (0.8”) than its siblings. The specific 20” light-alloy wheels were painted in high-gloss titanium gray.

Inside, the Cayman T featured door-pulls instead of handles. A discreet Cayman T logo adorned the dials and on the door entry sills. The instrument panel trims featured a glossy black finish. Included in the standard options was the Sport Chrono package as well. It offered the Normal, Sport, Sport Plus, and Individual settings via a rotary knob installed on the specific steering wheel.

For the technical department, the Cayman T featured a 2.0-liter flat-four engine turbocharged that offered 300 hp. It was fitted as standard to a 6-speed gearbox while a 7-speed automatic (PDK – dual-clutch) was on the options list. The rear locking differential was standard as well. 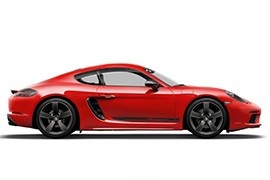