The 2012 Porsche Carrera 4 Cabriolet was that daily-driver supercar that could take its top off in 13 seconds and run away with its 350 hp delivered to its all-wheel-drive system.
And that only a part of the fun.

Porsche always had open-top vehicles. Looking back, it had a glorious roadster over the years. Some of them were meant for racing and performance. But there was a switch toward the luxurious convertibles, with high-performance and able to be used as a daily driver car.

The 2012 Carrera 4 Cabriolet kept the same unmistakably shape of the timeless Porsche 911 design convertible since 1982. On the front, the same rounded headlights shape, but with LED lights, were like a trademark for the vehicle. Over time, the windshield became more angled to improve the aerodynamic and, in the rear, the sloped back with the engine compartment.

Inside the Carrera 4 Cabriolet, there were some luxury features. The leather-covered sport-bucket seats were covered in leather. The canvas top was hidden behind a large, rigid cover, behind the rear very small seats. The center console was higher to give the driver a sense of a single-seat racing roadster. For the sound system, the German car-manufacturer offered few options, including a premium sound system from Burmeister sound specialist. For the transmission, Porsche offered a 7-speed manual as standard or a 7-speed dual-clutch PDK system. The 7-speed manual had an interesting feature that prevents the driver to accidentally downshift from 7th to 4th, which could damage the engine. 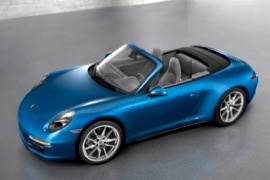