Porsche didn’t want to waste time and, at the beginning of 2021, introduced a new generation for its ferocious GT3 road-legal race-car.
Basically, the road-legal GT3 is the base vehicle used by Porsche to homologate the GT3 category race-version. While it was still based on the Porsche 911, it featured numerous modifications that made it lap the Nurburgring in 6:59.93 minutes, over 17 seconds faster than its predecessor. It was a marvelous time for a road-legal car.

One of the basic rules of a race car was to make them lighter, and Porsche tried hard to achieve the lowest weight for the GT3. It made the front hood, rear quarter panels, and roof from carbon-fiber-reinforced plastic (CFRP) as an option. The windows were slimmer, and most of the sound-deadening materials were gone. As a result, the GT3 tipped the scale at 1418 kg (3126 lbs) with a manual gearbox and 17 kg (37.5 lbs) more if fitted with the Porsche’s PDK transmission.

Inside, the carmaker installed sport-bucket seats at the front and a bench for two in the rear. Porsche offered a Club Sport package that deleted the rear seats for those who wanted to race their cars, installed a 6-point harness, a roll-cage, and an extinguisher. The dashboard was carried over from the regular 911, but with a big, analog tachometer marked to 10.000 rpm, with a 9.000 rpm red-line. The rev-counter was flanked by TFT displays and, just above the center stack, a bigger touchscreen for the infotainment system.

Under the bodywork, Porsche installed a double-wishbone system at the front carried-over from the Porsche 911 RSR LeMans race-car and a reinforced rear suspension. The all-wheel steering made the car faster on the curves. The German carmaker ditched the turbocharged 3.0-liter engine from the regular 911 range and installed a 4.0-liter naturally aspirated flat-six to propel the car. 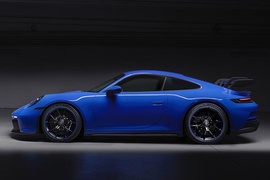