With each generation of the Porsche Turbo, the car received more power and more technological enhancements.
The 2020 911 Turbo was no exception, and it remained a great balance between high-performance and luxury items.

The first generation of the Turbo was introduced in 1975 and it offered 260 hp. 35 years later it added 380 hp on top of that and, since the 993 generation, an all-wheel-drive system.

The exterior might not be as aggressive as some other Porsche models, such as the GT3 or GT2, but the new front apron was a form-follow-function concept. The three big air-intakes looked like there was a trade between the engine department and the brakes department who will get more room for cooling. The car featured 20” front wheels and 21” rear wheels. Under the engine lid, the car-maker installed cooling fans and air-intercoolers. The side scoops, a characteristic for the 911 Turbo, were used to charge air. Also in the back, a big retractable wing was installed.

Inside, the Turbo featured a completely new dashboard. The tachometer was the only analog gauge in the instrument cluster. It was complemented on its sides by two other TFT displays. In the dashboard, at the same level as the sport steering wheel with paddle-shifters, there was the screen for the PCM (Porsche Communication Management) infotainment unit. A light pack offered slimmer and lighter seats, instead of the 14-way power-adjustable ones for the front occupants.

The engineering part of the car was the biggest improvement. It offered a newly developed, direct-injected 3.75-liter engine. It was fed by a pair of VTG turbochargers (variable turbocharged geometry) with a total result of 580 hp (40 hp more than its predecessor). It was paired to a standard 8-speed PDK (dual-clutch) automatic transmission with an option for a 7-speed manual. 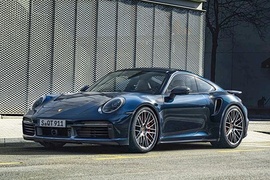