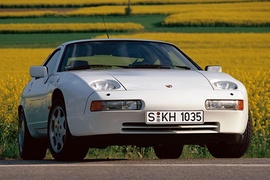 The world started to feel the wind of change, and the communist countries from Eastern Europe began to change.
At the same time, in September, at the Frankfurt Motor Show, Porsche unveiled the 928 GT.

The 928 was more powerful and fitted with better features than the rest of the range. The wind of change started to move the German car manufacturer and searched for evolution in its lineup. It tried a 4-door 928, but since it didn’t meet customer’s expectations, the manufacturer axed the program. The 928 GT, on the other hand, was not.

The original lines of the Porsche 928 were still beautiful but, somehow, already outdated since the car was introduced in 1977. The pop-up lights were almost out of fashion, and some of its features did not fit the times anymore. The long and flat hood and the 2+2 cabin were still attributes of a GT car. The designers took a different approach for the rear end, with a sloped and big windscreen as a tailgate.

To fit better in the GT category, Porsche did the car with leather sport seats. The engineers needed a higher transmission tunnel to install the gearbox in the back, in a transaxle system. The designers installed select trims on the steps and comfort features as standards, such as the AC unit and even a tire pressure monitor.

Porsche used the 5.0-V8 unit to rocket the car from 0 to 100 kph (0-62 mph) in 6.1 seconds, which was great for those times. The engineers paired the engine to an exclusively 5-speed manual gearbox. From 1990, Porsche introduced a limited-slip differential on the 928 GT.