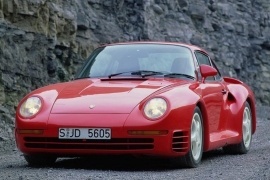 It was the only car in the world to tackle the Paris-Dakar and the 24 of LeMans race and win on both of them.
It was considered the absolute supercar of the world. The 959 is a legendary car.

When talking about a car that could do a quarter-mile-run in 12 seconds and be able to do a 0 to 100 kph (0-62 mph) sprint in less than 4 seconds, nobody would dare to think of a car older than 2010. But still, the mighty Porsche 959 was able to do that in 1987! On top of that, it was all-wheel-drive and featured three ground clearances so it could go off-road.

The 959 was showcased as a concept car in 1983 at the Frankfurt Motor Show. Porsche decided to build it anyway, and see what will happen. The result was a sleek, aerodynamic, muscular supercar that could go with 317 kph (197 mph) with zero lift. The rounded headlights, the raked A-pillars, and the huge wing in the back were unique on the market. Unlike its 911 siblings, the 959 featured a wide body with a completely different end. It featured two small air-intakes on the rear quarter panels needed to feed the engine.

The interior was fit for a luxury car from that era, with leather seats, a premium sound system, and air-conditioning. The tall sport-bucket seats in the front were accompanied by a pair of two, smaller ones in the back. A six-speed manual was installed on the floor. Maybe in 2010, a six-speed manual was not a big difference anymore, but in 1987 it was more than special.

The engine was a special flat-six with a 2.9-liter displacement aided by a big turbocharger. It could get 450 hp. The dry-sump lubrication system was a must since the car was built to be driven hard.